Why Change to Amsoil Motor Oil.

Amsoil Motor Oil:    Can you remember the last time you changed the oil on your car, or had it serviced for an oil change? Are you familiar with the differences between synthetic and conventional motor oil? Do you know what brand of engine lubricant goes in your car? If you answered “no” to even one of these questions, then this article is for you!

What Is Amsoil Motor Oil?

AMSOIL is an America-based manufacturer of engine lubricants offering exceptional products for European- and American-made gas or diesel engines. So, Amsoil is the bestselling Synthetic Signature Series motor oil, rated at up to 30,000 miles between oil changes.  Still, it offers a collection of other high-end engine lubricants, including lubricants for advanced engine protection, high performance, extended drain period, and more.

Then, a proprietary list of additives is added to the crude oil to increase its viscosity, inhibit foam formation during operation, prevent unwanted oil deposits from building up, and more.

Should I Buy Amsoil Synthetic Motor Oil or Conventional? 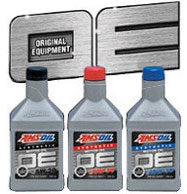 So, there are select circumstances in which one might prefer conventional engine lubricants to synthetics. For example, if you have an older car, one that you rarely drive, or even a vehicle that exists in a temperate climate with low miles spent commuting, you may be a good candidate for conventional oil. Particularly if the low price tag appeals to you and you are not as concerned with optimizing your engine performance, traditional oil may be an excellent solution to the question of “which motor oil is right for my car?”

How Good Is Amsoil Motor Oil?

We’ve already told you that Amsoil provides superior engine performance, but we haven’t quite told you why. So, it’s 5x cleaner burning in hot temperatures, up to 38% less oil consumption during performance and 36% easier starts in colder conditions.  AMSOIL offers results that far outstrip the competition.

These test results compare Amsoil synthetic engine lubricants to other conventional motor oils, inspired by a test that was performed by the American Automobile Association (AAA).

Next time you’re due to change your car’s oil, think before you buy. While investing in synthetic oil comes at an initially higher cost, the benefits are to the long-term health of your engine. Also well as the extended length of time, one can go between oil changes make this upfront cost disparity negligible. https://lubeoilsales.com/

As part of its manufacturing process, AMSOIL uses the ASTM D4172 Four-Ball Wear Test. The DIN 51581 NOACK Volatility Test demonstrates the measurable benefits of our synthetic lubricants over competing oils.

AMSOIL first utilized the NOACK Volatility Test as a standard of excellence. Graphs showing the Four-Ball Wear Test and NOACK Volatility. The test represents where AMSOIL motor oils stand against their competitors. AMSOIL motor oils offer additional measurable benefits that can’t be measured or graphed as easily.
AMSOIL purchases the best and most durable additives. As a result, AMSOIL motor oils are stable shear. It protects against varnish and sludge and maintains clean, corrosion-free engine components.

Low-shear oil loses its density relatively quickly, especially in high-temperature conditions. It decreases its ability to prevent metal-to-metal contact and wear.
AMSOIL Contains high TBN The combustion of fuel inside the engine produces damaging, corrosive byproducts. Oil passages become clogged with sludge and varnish deposits when fuel, soot, and water mix. It Restricts oil flow and causes vital engine components to stick and malfunction. The high TBN levels in AMSOIL
neutralize them all.

Motor oil heats up with the flames of burning gasoline. Due to that, oil burns off when it lubricates an
engine’s rings and cylinder walls. AMSOIL motor oil burns and keeps combustion clean. Preventing it from breakage, pinging, and engine knock, with other problems. That reduces engine longevity.

When the engine runs, the air in the crankcase gets whipped into the motor oil. Causing the oil to
foam. As a result, the air bubbles in the foamed oil sometimes collapse. Preventing heat transfer and further impeding the lubricant’s operation.
Removing foaming in AMSOIL motor oils prevents metal-to-metal contact and reduces wear. As a result of its high-quality base stocks and additives. AMSOIL motor oils offer extended drain intervals while maintaining performance. Its long-term wear protection, fuel economy, keeping engines clean
and deposit-free, cold weather starting, and corrosion resistance.

How did AMSOIL motor oil compare to Mobil?  According to industry testing results, comparing Amsoil motor oil with Mobil 1 speaks for itself. AMSOIL prevents viscosity breakdown by providing superior protection for pistons, cams, and bearings. Mechanical shear resistance During shear, two layers of oil move in the opposite direction. Under intense heat and pressure, these two oil films move in opposite directions. A scenario such as this can tear apart the molecules of viscosity-improving additives. They are extending the base oil’s viscosity range.

As a result of shear, Oil can lose its viscosity. It makes it less effective at protecting against wear. A thin oil film protects the bearings through the piston, rod, and crank. Making errors at this point is challenging.

One of the leading independent oil companies in the world, we formulate products based on performance, not price. As a result, you can push the limits of performance, power, and speed with a complete line of full-synthetic lubricants.
Get a great deal today!

Join our Preferred Customer program and receive FREE shipping, 25% off, and more